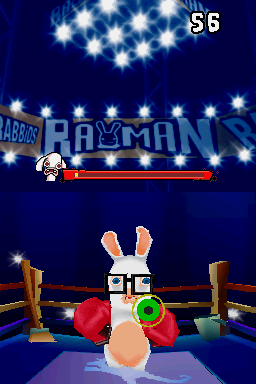 This minigame is set in a boxing ring, in which a Rabbid stands with a pair of boxing gloves on. The aim of the game is to tap on circles that appear at random places - for each one tapped, the player will punch the Rabbid and will earn 20 points. However, the Rabbid can hit the player back if the circles are missed, and the player will lose 10 points for every hit. Occasionally a blue circle will appear and if tapped, the Rabbid will be dizzy for a short time and the player will be given a chance to hit it without being hit back. In Adventure mode the game ends either when the bar at the top screen fills up entirely, or when the time runs out.

In Score mode, the player is given three chances and has to score as many points as possible. Once chance is lost each time the Rabbid punches back, and the game ends when all 3 chances are lost.