In a similar vein to the console version, Rayman is spying on the Rabbids' activity on Planet Earth, only that he is equipped with a camera which he uses to gather information about them. 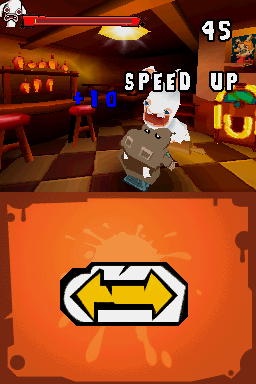 A Rabbid challenges a rodeo in the USA

In this game there are four modes of gameplay.

This is the story mode of the game. There are six regions of the world, and each of those contains 6 minigames. At first the player can only access the USA region, though the minigames in each region can be played in any order the player wishes, so long as the right amount of information required to progress through the game is obtained. In each minigame there is a bar that fills up as the player wins points, which range from 10 to 30 as the minigame is played. In a few minigames points can be lost. As the bar fills up, the Rabbid's face at the left side of it changes. The minigame ends when either the bar is filled completely, or if a time limit runs out in most minigames. The maximum information score to be obtained is 15 points.

In this mode the player can customise their own Rabbid using a drawing tool or by using items that can be unlocked if the player achieves an "Excellent" score in a minigame. This mode is also accessed on the world map via a small icon of a T-shirt at the top left of the screen.

Using the Nintendo Wi-Fi wireless system, up to four players can play a minigame at the same time.