Rabbids Heroes is a Rabbids game which soft-launched on iOS and Android in selective countries, such as Canada, in 2016. The game was a turn-based RPG where the player got to compete with other players online and earn more cards and characters. In October 2016 it was announced that the game would be discontinued November 15th. After the announcement, all in-app purchases became inaccessible and all players were given 15000 gold in the game as a compensation. 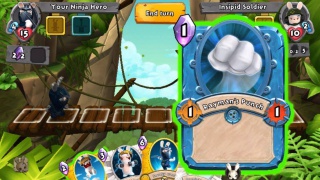 Rayman's fist making a cameo on a card.
Retrieved from "https://raymanpc.com/wiki/script-en/index.php?title=Rabbids_Heroes&oldid=77448"
Categories: