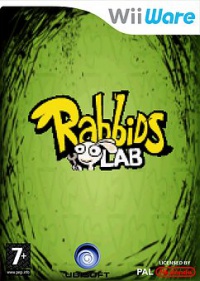 Rabbids Lab is a standalone version of In Ze Wii Remote, a customisation feature in Rabbids Go Home, which was released for WiiWare on the 27th November 2009 in Europe, almost a month after the main game was released for the Nintendo Wii. It costs 500 Wii points and takes up one channel in the Wii menu. It was released in North America on 28th December 2009.

Unlike the full version, Rabbids Lab only contains three utilities – Paint (known as Tattoos in the full game), Accessories and Tools, meaning that the Challenges and the Figurines features have been omitted. The ability to save the customisation has also been omitted, and instead the player has to take a photo with the camera mode and then send it to the Wii message board. From there it can be shared online, provided that the player's Wii has an internet connection. Many of the painting brushes are not present, and the stamps have been replaced with Christmas-related ones.