This article is about the now-defunct Facebook game. For information on the TV series of this name, see Rabbids Invasion (TV series).

Rabbids Invasion was a simulation social network game released by Ubisoft on April 3, 2012. The game (which was still in beta production throughout its course) was available for free as an Adobe Flash application for anybody who has an account on social networking site Facebook. On the 28th January 2013, the Rabbids Invasion Facebook page announced that the game was be closed on the 13th February 2013; the reason for this is currently unknown, but the name Rabbids Invasion had since been used as the title for an animated TV series which aired in August 2013.

The game was set in an environment in which humans have lived peacefully, and the aim was to invade as much of this environment as possible, while collecting experience and various items that become useful at various points. During the game, up to five quests at a time could be carried out, which upon completion give the player a number of rewards. While the game could be played with a single player with a "fake friend", it also had multiplayer interaction, which means that a player could invite a number of people from their friends list to give and receive items, complete quests etc. 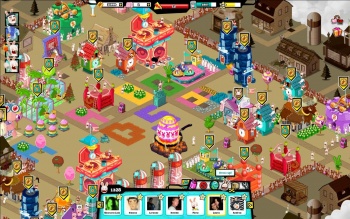 The Rabbids are given a number of different supplies which are required to invade the human environment with.

The game had two currencies; coins, which could be generated in game from buildings and are used to buy most items and invade buildings with, and toilet paper rolls, which must be bought either with Facebook credits or earned by participating in offers provided by business partners, and were used to buy certain items, complete quests which would otherwise need a friend's assistance and so forth.

Energy is used for carrying out various tasks such as invading and collecting from a building, and harvesting crops, and for each time this is done, one unit of energy is depleted. It can either be replenished by buying some with toilet paper rolls, or one unit of energy can be regenerated once every five minutes in real time. Each time the player increases a level, the bar is fully replenished.

Spicy sausages are used, in conjunction with coins, to expand an area that would previously be fenced off. One sausage can be earned each time the player reaches the next level, though they can be very rarely found while stealing from a friend's building. Up to 100 sausages can be bought at a time with toilet paper rolls.

Cans containing an unknown substance are generated from harvesting crops (e.g. roast chicken, hot dogs, etc.) in the Farm, or from Rabbids that have been in a public restroom in the City, and are used to feed the businesses which generate more coins than the houses do. The amount of cans that can be stored depends on how many small silos are built in the Farm.

Rabbids are used to invade several types of buildings, and can be generated from public buildings.

Throughout the game's course, two environments could be invaded - the Farm, which was the first to be invaded, and the City, which could only be accessed when 40% of the Farm was invaded.

Houses, such as cottages, cabins and apartments, generate the least amount of coins, although they do not need to be fed with cans.

Businesses, such as farms, stores and stands, generate more coins than the houses do, but these must be fed with cans in order to do so.

Public buildings do not generate coins but rather Rabbids, although they do not need to be fed. When being invaded, they may need friend assistance, or a number of certain items to complete.