Rayman Jungle Run is a 2D sidescroller platform game for iOS, Android, Windows Phone and Windows 8/10 devices, that uses the same graphical style and engine as Rayman Origins. It was released on iOS on the 20th September 2012 and on Android on the 27th September 2012. With an update released on 4th December 2012 for iOS, players can access 10 more levels and purchase a pack of new playable characters, including Globox, Raymesis and Raybox. In March 2013 the game was ported to Windows 8/10 and Windows Phone. Another update was released on 11th April 2013, containing 20 new levels.

A sequel, titled Rayman Fiesta Run, was released in October 2013. It takes place in Gourmand Land and Fiesta de los Muertos rather than the Jibberish Jungle.

In the game, Rayman runs automatically through the entire level. The player can jump, and use the helicopter later on, by tapping anywhere on the screen. In each of the original level packs there's a new ability unlocked, such as being able to wall run and punch. The punching is done by tapping a dedicated button in the bottom left corner. The goal is to obtain all 100 Lums in each level by collecting Lums and Skull Coins. There are 6300 Lums in total and they unlock downloadable wallpapers.

Each level has three Skull Teeth to be earned depending on the amount of Lums collected. The green one is obtained at 8 Lums, the blue one at 45 Lums, and the red one at 100 Lums. As soon as five red teeth in one world are obtained, the Land of the Livid Dead level opens up. These levels are much harder than the normal levels, but there are no Lums and the player only has to complete these levels in order to gain a red tooth.

The player can also try to beat their time record in any level, however these times are only displayed if the player collects all the Lums in that level - except the Land of the Livid Dead levels where the record time can also be compared in leaderboards. If all of the 10 red Skull Teeth are collected in any world, it will be marked with a crown and show a small cinematic with Mister Death showing all of his teeth back in their place. 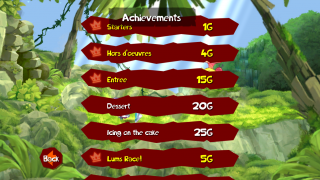 The achievement list, as seen in the Windows version.

Rayman Jungle Run has a total of 7 leaderboards for the Land of the Livid Dead levels.

Although there is no cloud syncing to sync the player's progress, the total amount of Lums are saved through iCloud on iOS devices so that they can transferred to Rayman Fiesta Run. 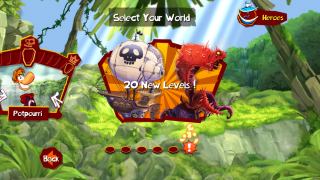 The main menu with the 20 new levels in the second update not yet downloaded.

Rayman Jungle Run is divided in seven level packs, with the first four ones giving priority to one of Rayman's abilities. All level packs are subdivided in ten levels, the tenth level only being accessed if the player has collected 5 red Skull Teeth from that pack. The game has received two updates since its release, adding the worlds Potpourri, Pirate Ship and Giant plant.

The game received critical acclaim for its art style and simple gameplay. Notably, it was featured as a free gift during Apple's 2013 "12 Days of Christmas" promotion.

Wallpapers are unlocked by collecting Lums.

Several debug levels have been discovered within the game files on the Android version.