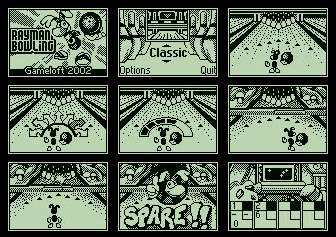 A selection of screenshots from the monochromatic version

Rayman Bowling is a bowling sports simulator game based on the Rayman series. It was developed and published by Gameloft. The first, more primitive version of the game was released in 2002, while a full-colour version was released in 2003. The player controls a Rayman 2-era Rayman as he goes bowling in various locations in the valley. The game features eleven levels of ascending difficulty. The player must knock down pins with a bowling ball and score a certain number of points in each level in order to progress to the next.