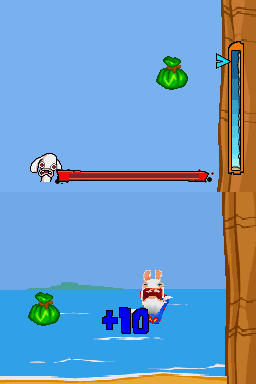 This Rabbid must avoid the falling trash bags.

In this minigame, a Rabbid in a Superman costume (either Clark the Superbunny in Rayman Raving Rabbids or another super rabbid) is falling off a cliff, and the aim is to touch him with the stylus and drag him away from falling trash bags. For each bag that passes him, the player receives ten points, but if a bag does hit him, the player briefly loses control of him, making it more likely to lose. In Adventure mode, the game ends either when the bar at the top screen fills up entirely, or when the Superbunny reaches the lowest point of the cliff.

In Score mode, the aim this time is to score points for as long as possible. There is no end point of the cliff, so if the Rabbid is hit too close to the bottom of the gorge, the game is lost.