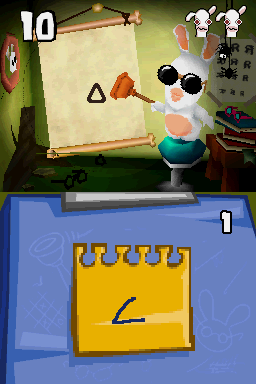 A Rabbid wants the player to copy this shape.

This minigame is set in a poorly lit optician's room, in which a Rabbid in large round sunglasses points at a projection screen with a plunger. A random shape - either a triangle, circle or a cross - will appear, and the player has to draw this shape as accurately as they can on a piece of paper at the bottom screen, using the DS stylus, within the time limit. As the game progresses, more pieces of paper will appear, and the player will then have to draw the right shape on the right sheet of paper - for example, if a cross was on the right side of the screen, the player would draw the shape on the second piece of paper to the right. In Adventure mode, the game ends when the game time runs out.

In Score mode, instead of a time limit, the player is given three chances (represented by a Rabbid head) has to carry on playing for as long as possible until all three chances are used up.