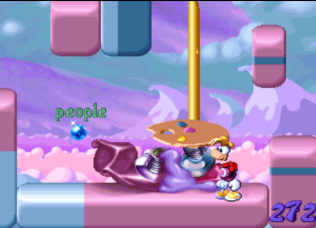 Rayman can only collect tings which have words beginning with the letter 't' above them.

Media is the fifth level of English with Rayman, which is set in Picture City. The general theme of the level is words related to the media, including the press, news, television and film industry. Betilla the Fairy and her English speaking relative act as the helper characters who ask the questions.

Rayman must travel on a palette, identifying words which rhyme with the ones given by the English Betilla's magic hat. To activate a correct answer, he must throw his fist at the paint brush which displays it. The level design is taken from the first part of Art Alley from Rayman Junior.

Rayman has to explore a maze like level, collecting tings which display words beginning with the letter 't'. Collecting a wrong answer will activate an instant death trap. All of the correct answers have a media theme. He must also avoid Space Pirates, pencils and other obstacles that are located around the map. When he has collected all of the answers, an exit sign will appear somewhere in the level, along with Betilla, who congratulates him. There is a time limit of three minutes.