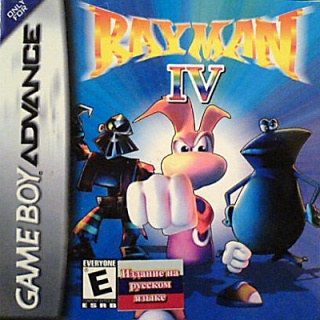 Rayman IV (not to be confused with Rayman Raving Rabbids, in its early stages), also known as Rayman: Der Sonneschein auf der Reise is an unlicensed game for the Game Boy Advance that originated from Russia. Typical of an unlicensed game, it has neither the Ubisoft logo or the Nintendo Seal of Quality, but has an ESRB rating of E for Everyone (normally used in the United States), the Russian flag and the "Only for" notice on the side of the cover. The cover features poorly edited artwork that was previously used in Rayman M and Rayman Arena, notably of Rayman, Globox and a Henchman 800, set against a blue background.

In 2011, a copy of the game was discovered, although the ROM has yet to be dumped. It can only be played on a Game Boy Advance, a Game Boy Advance SP and a Game Boy Player (an add-on for the Gamecube), but it will not run on a DS or a DSLite.

Elements from other video games

As an unlicensed game, Rayman IV uses elements taken directly from other video games. In Stage 2 for example much of the background and foreground elements are taken from the SNES video game Speedy Gonzales: Los Gatos Bandidos, which was previously hacked into a Sonic the Hedgehog pirate for the SNES.