From RayWiki, the Rayman wiki
(Redirected from Romeo)
Jump to navigation Jump to search 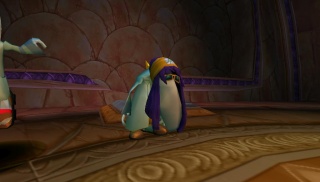 Roméo Patti in the Longest Shortcut.

Roméo Patti, also known as Al Urgic, is the second of the three Teensie doctors whom Globox has to see in Rayman 3. His names are puns on the medical term ‘homeopathy’ and ‘allergic’. He talks like a hippie or a surfer, and unlike the other Teensie doctors, he wears an orange beanie hat and has long purple hair, as well as wearing the stereotypical hippy sunglasses. His office is located in the Land of the Livid Dead.

When Globox swallows André, Rayman and Globox travel to Clearleaf Forest to find Otto Psi, who they believe may be able to get André out of there. Roméo is first mentioned here by Otto. He then activates the portal which allows Rayman and Globox to move on.

On the way to meet Roméo in the Land of the Livid Dead, Rayman and Globox are separated, landing in the Bog of Murk. They spend the duration of that level attempting to find their way out so that they can meet up with Roméo. At the very end of the level, after Count Razoff is defeated, Globox mentions Roméo again to Rayman.

Roméo finally appears when Rayman and Globox reach his office in the Land of the Livid Dead. When they arrive, some Hoodlums have invaded the office, as with the other two doctors, and Rayman must use the Shock Rocket to defeat them, as he cannot physically reach Roméo until he does. After the Hoodlums are beaten, Rayman continues onwards, however, Globox refuses to go as he has grown wary of Teensie doctors after suffering at the hands of Otto. However, more Hoodlums arrive, and Globox follows Rayman out of fear.

Roméo greets with a joke referencing to the fact that Globox is on the operating table. Roméo is already of Globox's predicament, as Otto has explained it to him. it is here that Roméo reveals his knowledge of Black Lums. This is relevant later, when André uses the Sceptre to reproduce many Black Lums, and may also explain how the Black Lum army multiplied so quickly. Roméo then proceeds to use Globox's belly as a drum, which causes André to vacate Globox's stomach and enter his brain, which Roméo cannot find. He then opens up another portal, telling Rayman and Globox to visit another Teensie doctor in the Desert of the Knaaren. He then announces that he has to go and water his plants.

At the Desert of the Knaaren, Rayman and Globox meet the doctor Roméo was talking about, Gonzo. Gonzo realises that he cannot get André out of Globox's stomach alone, so he calls upon Roméo and Otto to help, and the three doctors are first seen together. Together, the three manage to free André, who then escapes. Roméo reacts quite calm to this, commenting on how fast André was.

Roméo goes with the other doctors, Rayman, and Globox to show the two heroes the Longest Shortcut. There, the three doctors explain that Reflux and André have joined forces to get revenge on Rayman, and have stolen Gumsi's sceptre. Roméo tells Rayman that they plan to use the Sceptre to gain power. Along with the other three doctors, he seems to believe that the shortcut will help Rayman and Globox reach André and Reflux, although it does not appear to help at all. He then leaves with Otto and Gonzo.

Roméo makes a brief appearance, again with Otto and Gonzo, at the end of the Longest Shortcut. He helps explain, somewhat unsympathetically, to Rayman and Globox that Reflux and André have escaped. The three doctors give the two heroes a boat, with which to chase the villainous duo. Roméo along with the two other doctors are not seen again in the game. 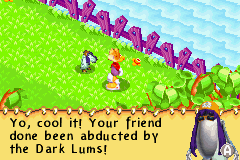 In Rayman: Hoodlums' Revenge, Roméo makes a brief cameo appearance. He is the only one of the three Teensie doctors to do so. He first appears to Rayman near the beginning of the game, where he explains that Globox has been captured by the Hoodlums. Roméo refers to himself simply as Doc. He appears again a few levels later, where he gives Rayman a boat with which to travel through a swamp. He is mentioned once more in the game, when Rayman and Globox are wondering how to escape from Bégoniax's swamp. Globox, who is possessed by André, threatens to push Rayman off the dock, which causes Rayman to think of ‘Doc’ and go in search of a boat.