Mystic and cranky protectors of the Glade. When Bubble Dreamer began having bad dreams, the crotchety Fakirs gathered in the mystical mountains to meditate and chant myopic mantras. They believe that only by serious devotion, deprivation and dreariness, could the magic peoples counteract the effects of the bad dreams, which were certainly devised to punish the other, less serious Glade inhabitants. With the Glade in imminent danger, the Fakirs gathered and delved deep into trance and chanted mystical mantras. Their purpose: to hide the routes to the heart of The Glade where the Maker is said to dream the world. The magic peoples must no longer freely approach the sacred grounds for fear of making the Nightmare even worse, nevertheless, the nymphs mark the trail with bright Lums so that our heroes might find the way....
—Official site, Rayman Origins

Fakirs are the oldest members of the Red Wizards clan in Rayman Origins. They are dreary fakirs that can usually be found meditating cross-legged, much like the Monks. They reside the Mystical Pique.

Fakirs share most of the features from the other Red Wizards, they are amphibian-like creatures with a dark orange skin, small eyes (usually closed until something hurts them) and light-orange facial hair. They wear dark-green loinclothes, and some piercings on their bodies. Some fakirs have long light-orange beards, while others keep their beards short and wear enormous plain hats on their heads. Fakirs, unlike other members of Globox's species, have long, thin legs, which they use to meditate cross-legged. 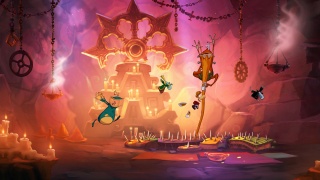 A Fakir's beard can be used to swing over obstacles.

The fakirs make their first and only appearance in Rayman Origins. Fakirs habit the Mystical Pique since the Bubble Dreamer had his first bad dreams. They think that acting serious and being devoted is the only way to counteract the effect of the nightmares, and they manage to punish (with the help of the other Red Wizards) every non-serious inhabitant from the Glade of Dreams.

In-game, they can be found meditating. Rayman and friends can hang on the long beard of levitating fakirs and swing around to get to distant platforms. Fakirs with plain hats can be used as platforms to avoid the spikes in which they are usually sitting.