What type of Hoodlum is this? http://img14.imageshack.us/img14/9126/hoodsomething.jpg

Oh, Hunchman, Hunchman, Hunchman. I was recently playing on the French version of the game and those guy's names begin with a 'T'. Also, I locked on to a regular Hoodblaster and it said THAT was the Caporal. I've edited the location now, so nothing to worry about. Iheckler9 09:43, 20 December 2010 (UTC)

I think they're called Hoodmonger Officers (as opposed to Hoodmonger Soldiers). Do we seriously not have a page for these guys yet? —Spiraldoor 16:59, 20 December 2010 (UTC)

Should we arrange the Hoodlums in order of their names or which one is found first? --iHeckler9

Order of appearance. It's the only possible order which has any sense to it. —Spiraldoor

Should we create a page for these in the Hoodlum article? It's just a possibility. --iHeckler9

Creat a page in the article? I don't understand you. —Spiraldoor

I meant a link to them. --iHeckler9

There are already two. If you mean to ask whether we should put a link to Black Lum in the 'List of Hoodlums', then no, we should not. Black Lums are distinctly different from Hoodlums. —Spiraldoor

What the hell is a Hoodlum Zeppelin? Am I missing something? --

EDIT: Wait, I've looked into a dictionary for the meaning of the word. *Learn to pick up dictionaries next time* But aren't this just objects? Oddly I see them in the characters section. --

You're right, they have nothing to do in that list. —

Neither the Horrible Machine or the Armaguiddon should be there. The 3 objects should be in separated sections like veichles and machines. --

Well shouldn't the Hoodstomper machine be in the devices section as well? --iHeckler9

No, the Hoodstomper is clearly a Hoodlum. That's like listing the Heckler as a 'device' because he also wears a mechanical suit. —Spiraldoor

Correct, the Hoodstomper is the name of the small Hoodlum itself that uses those big "cilindrical" legs, not the legs itself. --

What do you think his name should be? --iHeckler9 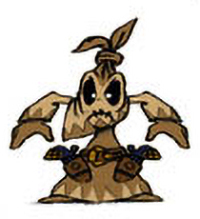