Grovebox is a character who appears in Rayman Adventures and Rayman Mini. He is a tribal warrior who originates from the Jibberish Jungle. As stated in the pack he can be purchased from, Grovebox is part of the GOT, Glade Olympic Team.

Grovebox shares the same skin color as Globox, but has yellow and orange body paint covering the top of his head. He wears some feathers on top of his head, a necklace made of flowers, and a grass skirt. His feet are laced with leaves on top of both of them.

Having been raised in the Jibberish Jungle, Grovebox isn't the one for personal hygiene. He quickly discovered that wearing flowers hides the stench just fine!
—In-game description, Rayman Adventures

He can be unlocked in Rayman Adventures by purchasing the Olympic Pack. 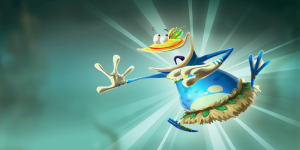 In Rayman Mini he is unlocked for 20 Swag Coins.