The Ninja Teensy (named Alain Visible in the original French version) is a playable Teensy character in Rayman Origins, Rayman Legends, Rayman Adventures and Rayman Mini. According to the Bubble Dreamer, he is the last of the Ninja Teensies, and can be a little loud while using his stealth.

He looks like an average Teensy, wearing a black coat, a black robe, an orange belt and a bandana; his bandana features a fictional red flag with a white circle – an inverted version of the national flag of Japan. His colour scheme is considerably similar to that of the Goth Teensy.

Ninja Teensy! The last of your stealthy kind! Try making less noise when you sneak around. Never mind, I'm sure the Livid Dead will be tickled to death by your killer looks.
—Bubble Dreamer, Rayman Origins

In Rayman Origins he is unlocked once 75 Electoons have been collected.

This Teensy is really into Kung Fu and all kinds of martial arts. His goal: train all his fellow Teensies so they can avoid being captured next time!
—In-game description, Rayman Legends, Rayman Adventures

In Rayman Adventures he can only be unlocked by purchasing the Dojo Pack. 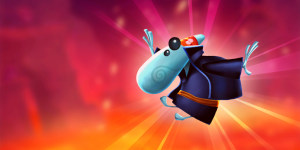 In Rayman Mini he is unlocked for 19 Swag Coins.