The pirate leader, he is famous throughout the galaxy for reducing over 100 peaceful planets to cosmic dust. Don't be fooled by his pathetic and silly appearance – his ferocity is unmatched. His dream? Overrun Rayman's world and reduce all its inhabitants to slavery...
—Manual, Rayman 2

The Admiral Razorbeard is a spacefaring robotic pirate, and the main antagonist of Rayman 2 and its remakes. From his flying ship, the Buccaneer, he commands the Robo-Pirate fleet which seeks to enslave the inhabitants of the Glade of Dreams. Admiral Razorbeard makes substantial appearances in Rayman M and the Game Boy Advance version of Rayman 3, as well as minor appearances in Rayman 3, The Animated Series and Rayman Kart. Early in the development of Rayman 2, Razorbeard was known as Razor Face.

Admiral Razorbeard is the leader of the Robo-Pirate army, which invades the Glade of Dreams and captures most of the world's inhabitants to use as slaves. He is a short robot with a peg-leg, wearing a huge Admiral's hat and striped red-and-white trousers, and his face sports the large, crooked metal beard from which his name is derived. In Hands Down! it is mentioned that his beard is made of steel.

Admiral Razorbeard is infamous throughout the universe for invading and conquering over one hundred peaceful planets and reducing their inhabitants to slavery; these planets were left as nothing more than interstellar dust, and it is unknown what fate the slaves suffered.[1] In Rayman 2, Razorbeard and his Robo-Pirate army invade Rayman's world, the Glade of Dreams. In Rayman: The Animated Series, however, Razorbeard works at a circus, as a mere servant to the Ringmaster, Rigatoni; this starkly contrasts with his role in the games, and it is unclear whether the events of the Animated Series are part of the game series's continuity. In Rayman M, it was revealed that Razorbeard has a wife, aptly named Razorwife, who can be unlocked as a playable character in the game.

Admiral Razorbeard makes his debut in Rayman 2, where he is the main villain and the commander of the invading Robo-Pirate army. Prior to the game's opening, Razorbeard and a group of Robo-Pirates arrive in a Warship to raid the Glade of Dreams. In a memorable battle, Rayman and Ly the Fairy defeat the pirates on board, who flee in an escape capsule.[2] Razorbeard is enraged by this defeat; he and his Robo-Pirate servants practise their marksmanship by firing cannonballs at statues of Rayman.[3] Soon afterwards, the Robo-Pirate army arrives in full force: the invasion begins. Some time later, Rayman, Globox and a few other members of the resistance attack the Robo-Pirates in their encampment at the Great Forest. However, at this time the pirates destroy the Heart of the World, scattering its 1000 constituent Yellow Lums across the world. The Heart's destruction causes Rayman to lose most of his powers, and the pirates capture him. Rayman encounters Razorbeard for the second time, and they exchange threats and vows of enmity. The beginning of the game picks up immediately afterwards: Globox and Ly the Fairy help Rayman to escape. Throughout the rest of the game, Razorbeard spends most of his time in the Buccaneer, where he sits on his throne, waiting for his lackey, the Spyglass Pirate, to give him news of Rayman's whereabouts. At one point in the game, he eats a Yellow Lum, reducing the maximum number on the on-screen counter from 1000 to 999; however, this Yellow Lum is later found in the Tomb of the Ancients. Razorbeard often calls for the Spyglass Pirate to send Warships out to capture Rayman, and his frustration with Rayman's constant evasion leads him to issue orders for the hero's return to him, dead or alive.

At a late point in the game, Razorbeard receives a very special visitor; this is the General from Tonic Trouble, making a cameo appearance in Rayman 2. This guest offers to sell the Admiral the Grolgoth, a powerful pilot-controlled robot which could be used to kill Rayman. Razorbeard fantasises about the robot shaking Rayman to death, and decides to purchase it. He then lures Rayman to the Crow's Nest using Globox as bait. After a lengthy battle, the Grolgoth is defeated. Razorbeard flees in a flying escape pod after activating the Grolgoth's self-destruct mechanism, which destroys the Buccaneer entirely. Rayman survives the explosion, while Razorbeard flees into space in his escape pod. He is seen flying beyond the stars in the credits sequence. His current whereabouts are unknown.

Razorbeard is the villain of the Game Boy Color adaptation of Rayman 2, although, like most characters in this version, his role has been significantly reduced. He has a cameo appearance at the start of the game, although he is not named until Rayman finds the fourth mask of Polokus. He appears again just before the final battle. Perhaps the most notable aspect of Razorbeard's role in this version is that although the dialogue implies the final battle to be against him, the sprite used during gameplay is actually that of a Henchman 800. As Razorbeard's fate is never revealed following the battle, it is not clear if he is intended to be the final boss or not. Either way, the characters celebrate victory after Rayman has defeated the Henchman 800, suggesting that Razorbeard is no longer a threat at this point. 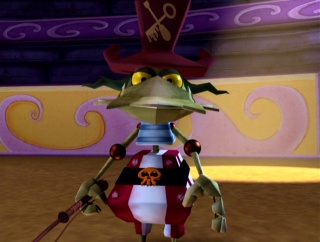 Razorbeard in Rayman: The Animated Series.

Razorbeard makes a brief appearance in Lac-Mac Napping, the pilot episode of the short-lived cartoon, Rayman: The Animated Series. In this series, Razorbeard is not a primary villain as he was in Rayman 2, but a mere circus employee, and a lackey to Rigatoni, the evil ringmaster. Although Razorbeard retains his irritable personality, his physical appearance has changed; he now has a mouth (which is strangely under his beard), and his hat bears a symbol of crossed keys rather than the Robo-Pirate insignia. He now has a human, non-robotic voice, which was provided by Carlos Alazraqui. 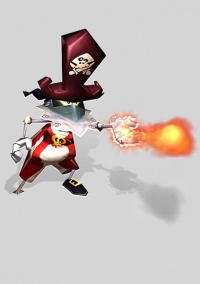 Razorbeard wielding Rayman's characteristic magic fist power. All the characters have this ability in Rayman M. 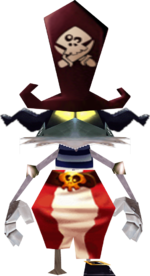 Razorbeard, as appearing in Rayman M.

Always angry, irritable and mean. What he lacks in size, he makes up for in spite, making him a master of shots below the belt, which he likes more than anything else.
—Manual, Rayman M

Razorbeard is one of the five playable characters that are initially available in Rayman M. This game also introduces his wife, Razorwife, who can be unlocked as a playable character. The manual for the GameCube and Xbox versions of Rayman Arena, the North American localisation of Rayman M, offers the following description of Razorbeard:


Likes: His job as Master of the World, sailing without a compass, and when his wife goes on vacation without him.
Dislikes: Rayman, doing the dishes in front of his men, and his wife's rolling pin.

Address: Villa "Home Sweet Home" – the one with the carnivorous plants. 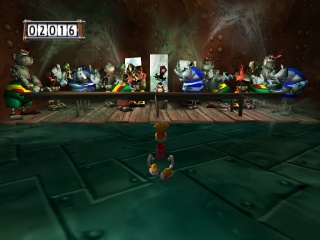 Statues of Razorbeard and other Robo-Pirates in a secret chamber in the Hoodlum Headquarters.

Razorbeard makes a brief cameo appearance in Rayman 3, along with several of his Robo-Pirate servants. They can be found in the third part of the Hoodlum Headquarters, in a secret chamber hidden within a gigantic boiler. What appear to be statues of Razorbeard and his robots are seated at a large table, in a parody of Leonardo da Vinci's famous painting, The Last Supper, with Razorbeard in the place of Jesus. The pirates are covered in cobwebs, and do not move or speak. It is unknown if these are simply statues, or if they are the Robo-Pirates themselves, having died or run out of energy. 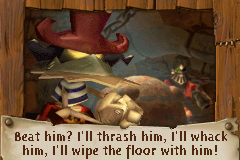 Razorbeard, as he appears in the Game Boy Advance version of Rayman 3.

Razorbeard is the main villain in the Game Boy Advance version of Rayman 3. At the beginning of the game, Razorbeard is revealed to be in hiding somewhere in the Glade of Dreams, with a small group of surviving Robo-Pirates. When he learns that Globox has swallowed André, Razorbeard decides to launch a new invasion, with the intent of capturing Globox and harnessing André's power. At the end of the game, Rayman fights Razorbeard in another Grolgoth in the Heart of the Ancients. 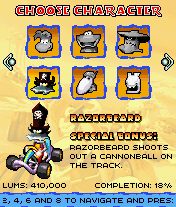 Razorbeard, as he appears in Rayman Kart.

Razorbeard is one of six playable characters in Rayman Kart, a racing game designed for certain mobile phones. As of 2018, this is his latest appearance in the Rayman series.