From RayWiki, the Rayman wiki
< User:Cairnie
Jump to navigation Jump to search

Looks like subpages work now finally! This is my cesspit where I test some junk.

Bad article writing is when you do it wrong, and here are some real examples of shit just like that.

The Eastern Plains In Near Where Clark Saves You From The Robo Pirates And Rayman revolution.

There Are Infinite Pirate's In A Nearby house To There.

Up To The Right of the entrance is a path leading to the menhir hill's that you can enter once you get the 1st mask. there will be no pirates at the point where clark is going to smash the gate for you.

this is a good training place since the other colors spawn once you encounter them.

stay away from here cause it can be dangerous.

mairy the fairy is a rayman charecter who has helped rayman in his past to find globox who was still young and stupid, he got stuck in a hole whilst he was trying to jump across it. so mairy helped rayman find were the help screams came from. when rayman found him he helped him out and then they became bester freinds. mairy the fairy was also seen later in rayman 2. on razorbeards prison ship.

Tonic Trouble is a game based on the Rayman series (even though it wasn't a story about Rayman's World in general) that was created a month after the original version of Rayman 2. It's about a Friendly but Clumsy alien janitor named "Ed" who accidentally dropped a Mysterious can of Tonic on Earth. Causing it to infect humans, animals and plants. The tomatoes are rolling away, the carrots are bouncing at high speed like jack-hammers, icebergs even started appearing and disappearing. The whole World has gone topsy-turvy. Back at Ed's home, he is sent back to repair the damage he did. But the can of tonic has fallen into the hands of a ruthless Viking giving him great powers. His name was "Grogh the Hellish" and he declared himself as the master of earth!

Help Ed explore earth, encounter strange and dangerous beings which was in fact (like already mentioned), his whole fault in the first place.

Exhibit E - the cream of the crud

i am very very very sorry that i told you tu shut up with yor sceaming can yo please forgive me .mabye thank you

Now you have an idea on how not to write articles here. :D

Land of the livid dead

The Land of the Livid Dead is an optional level in Rayman Origins. It's located under the Snoring Tree, and in order to access it, the players must get all of the Skull Teeth (and therefore 200 Electoons as well) and give them to the Grim Reaper, who guards the entrance.

The Land of the Livid Dead is a hellish underworld populated by undead grannies, in which Big Mama acts as the final boss.

In this area, the heroes must run away from a swarm of killer flies and leap onto the skeleton of a long flying creature across a lake of purple toxic liquid, while avoiding several thickets of thorns. A few Grannies stand along the way, these must be spun into or jumped on in order to keep safe while riding the skeleton. Eventually the heroes arrive on safe ground, and then must move on to an area in which they must climb various obstacles (akin to the Mystical Pique and the Moody Clouds) such as coffins and bones that continually fall into a bottomless pit.

Finally, the heroes encounter Big Mama, bathing in a pool of molten lava while painting her nails. They must bounce onto a mushroom which takes them onto her left arm; as soon as she discovers them, she screams and the battle begins.

Rabbids Rumble is a game in the Rabbids series, which was released in November 2012 for the Nintendo 3DS. Unlike its predecessor, Rabbida 3D, which was a platformer, the game returns to the minigame format, while making use of the handheld's features such as the camera, tilt controls and augmented reality, it features a mode called the Rumble Arena which uses RPG elements.

The game comes with an AR card, and as such contains minigames that make use of it. 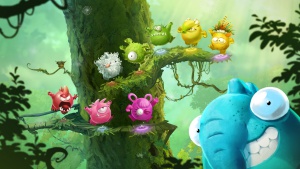 Some of the Incrediballs playing in the Sacred Tree.

The Incrediballs are creatures residing in the Glade of Dreams that make their début appearance in Rayman Adventures, in which they offer their skills to assist Rayman, Barbara and other heroes in their adventures, once rescued and hatched from their eggs. Currently there are 126 Incrediballs to find, and they are split into 23 families.