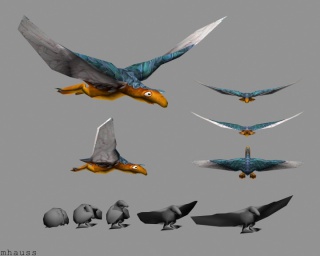 The wooglah is injured. We must find an antidote in these bogs ! I stay here in the meantime.
—Globox to Rayman, The beta of Rayman 3 (unused dialogue)

The wooglah, sometimes spelled woogla is a creature that would have appeared in Rayman 3.

The wooglah is a gigantic bird with blue and orange plumage. His beak looks like Rayman's nose.

In one of the first scenarios of the game, still visible in the script of the beta, Rayman and Globox use the wooglah to go from Clearleaf Forest to the Land of the Livid Dead. But when they fly over the Bog of Murk, the wooglah becomes injured (for unspecified reasons), forcing them to land. Globox decides to stay with the wooglah while Rayman seeks the able antidote to treat him. Murfy comes to meet Rayman and advises him to go ask Bégoniax to help him. Bégoniax has seen the wooglah when he was injured thanks to her magic mirror. She agrees to cure the wooglah, provided Rayman brings her a beauty elixir that is hidden in the swamps.

Later, Rayman comes in Count Razoff's mansion. After their fight, Bégoniax charm Razoff thanks to its beauty elixir. The witch and the hunter promise to take care of the wooglah, and then indicate a path to Rayman and Globox to go into the Land of Livid Dead.

When the scenario of the game has been completely revamped the wooglah was removed for unknown reasons. But the textures are still present in the game files of the Mac version of Rayman 3.