The Fairy Council is the first level in Rayman: Hoodlums' Revenge. As with many games in the Rayman series, it serves as a tutorial level in which Murfy will appear from time to time to give the player instructions in using Rayman's abilities and passing obstacles. Once the level has been completed, and if the player decides to return here, Murfy will not appear again. This level introduces Red Lums and Yellow Lums, which in this level there are 48 of them to be collected. 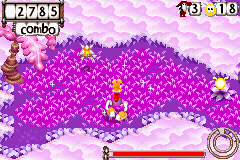 Similar to the level of the same name in Rayman 3, this level is set in a place in which the grass is purple in colour. Much of the land is surrounded by golden railings and lampposts. However, large bodies of pink water surround the area as well as its many small islands, which Murfy describes as not looking "healthy", assuming that it has been poisoned. Rayman therefore cannot step in the water (and all other bodies of water and sharp obstacles in the game for that matter) for too long otherwise his health will quickly deteriorate to the point of game over. At the end of the level, there is a gate that has to be opened upon hitting a switch.

Neither fairies or the Fairy Council seen in Rayman 3 are anywhere to be seen in this area. This level features three types of enemies: Slapdashes, Ninja Crabs and Podocrocks.