From RayWiki, the Rayman wiki
(Redirected from Sssssam)
Jump to navigation Jump to search

This young and spirited serpent is the ferryman for the Marshes of Awakening. He helps the inhabitants waterski across the swamps...
—Manual, Rayman 2

Ssssam the Watersnake is a character that appears in Rayman 2, its remakes and the Game Boy Advance version of Rayman 3.

Ssssam is a purple serpent who dwells in the Marshes of Awakening, acting as a ferryman for the Glade's inhabitants. He has a disproportionately large head compared to his thin body. The body itself appears to be no longer than Rayman's height; however, he is never seen in full – only his head, part of his neck and occasionally the tip of his tail are ever actually visible, as he always partially submerged in the water of the Marshes. As a result, it is impossible to gauge just how long he might be, though he is small enough to fit inside a Robo-Pirate cage.

Ssssam speaks with heavy emphasis on sybilants, not unlike a stereotypical cartoon snake.

Ssssam is described as a ‘young and spirited serpent’ in the manuals for most versions of Rayman 2, and he appears to be very cheerful, enjoying the simple things in life. Upon being able to stretch out after being freed from his cage by Rayman, he says that it is ‘Sssssensational’. He does not have any knowledge of the Masks of Polukus, possibly due to spending most of his life in the Marshes.

In Rayman 2 and its remakes, Ssssam is first found by Rayman in the Marshes of Awakening, imprisoned in a pirate cage. Upon being freed by Rayman, Ssssam stretches and agrees to take Rayman across the Marshes, as he had seen the pirates take Globox in that direction. On the other side, Ssssam bids Rayman farewell and asks Rayman to make a point of visiting again. From this it would seem that he is very lonely, possibly having no friends within the Marshes.

This is his only appearance in most versions of the game. However, in Rayman Revolution, a bonus minigame called Waterski Challenge can be unlocked by talking to Ly the Fairy once the player has freed 30 of the game's 80 Familiar Spirits. The bonus level is another waterski chase, similar to the one in the Marshes of Awakening. Rayman must collect 20 Red Lums as Ssssam takes him through a swamp.

Originally, Michel Ancel didn't want Ssssam to be in Rayman 2 but eventually got convinced that he should make it to the final game. [1]

In the Game Boy Color version of Rayman 2, Ssssam appears with a much smaller role, appearing only at the end of the first level of the Marshes of Awakening (although he can be seen again with the rest of the cast at the end of the game). In this version, he simply lets Rayman ride across the marsh on his head, rather than waterski. He is never named in this game. 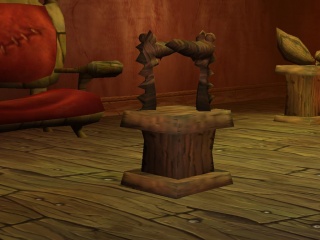 Statue of Ssssam seen in Razoff's mansion in the Bog of Murk.

Ssssam makes a cameo appearance in Rayman 3 as one of Count Razoff's statues. A developer referred to these statues as Razoff's ‘finest catches’ in a RaymanZone interview, indicating that Razoff had captured Ssssam at some point. 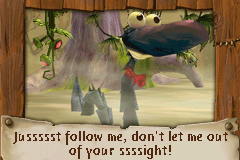 Ssssam, as he appears in the Game Boy Advance version of Rayman 3.

In the Game Boy Advance version of Rayman 3, Ssssam is first found in the Swamp of Bégoniax, this time uncaptured, where Rayman asks Ly the Fairy for directions to find Globox. He then allows Rayman to waterski through the swamps in a similar fashion to Rayman 2.