From RayWiki, the Rayman wiki
(Redirected from Yellow Lums)
Jump to navigation Jump to search 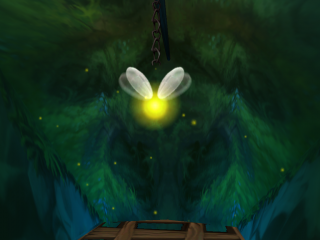 A Yellow Lum, as seen in Rayman 2.

Yellow Lums are the most important of all Lums. They, along with the Red, Blue, and Purple Lums, created the god Polokus, who went on to create the Glade of Dreams. There are exactly 1000 Yellow Lums in existence; when united (which seems to be their natural state), they form the Heart of the World, which was shattered into its constituent Yellow Lums by the Robo-Pirate army prior to the beginning of Rayman 2 and the Game Boy Advance version of Rayman 3, and by the Rabbids in the Game Boy Advance version of Rayman Raving Rabbids. In such cases Rayman is required to collect all of them throughout the course of the games; the Heart (which contains them) is seen for the first time in the Fairy Council in Rayman 3. The Game Boy Advance version of Rayman Raving Rabbids contradicts the previous games regarding the number of Yellow Lums, featuring 1550 of them to collect, rather than the previously established 1000.

There is some evidence to suggest that the Great Protoon and the Heart of the World are in fact the same object; the reason for its differing appearance in the original Rayman game and Rayman 3 may be its destruction by the Robo-Pirates and its subsequent reconstruction by Rayman and the Teensies. If this is true, then the 1000 Yellow Lums (in the form of the Great Protoon) could have actually have first appeared in the original Rayman game.

Yellow Lums are the 1000 fragments of the Heart of the World broken by the pirates. They contain universal knowledge. The more you gather, the more you will learn. You can access the secrets of the world by pressing F1.

There are 4 types of Lums. The most important ones are the Yellow Lums. There are 1000 of them. The Yellow Lums give knowledge to those who gather them and can also open doors into unknown places...

—The Knowledge of the World, Rayman 2

These are the 1000 shards broken from the Primordial Core when the pirates exploded it. When Rayman has collected enough of them, he'll be able to negotiate his entry into new worlds. In addition, they contain precious knowledge. The more Rayman can gather, the more he knows of the secrets of the world. At any moment in the game, just press F2 to read new information provided by the Yellow Lumz.
—Manual (PC version), Rayman 2

A Yellow Lum, as seen in Rayman 2 Forever.

In most versions of the game, there are 1000 Yellow Lums to collect, which are scattered across the many levels that Rayman will travel through. Many will be encountered individually, floating at the same spot until collected, others have merged into Super Yellow Lums, which are worth 5 normal Yellow Lums, and some can be found hidden in cages. As Rayman's count of Yellow Lums increases, he will unlock more of the Knowledge of the World, which contains lore based on the past of Polokus and the current situation with the Robo-Pirates. It is because of the blowing of the Heart of the World and the scattering of the Yellow Lums that Rayman, Ly, the Teensies and possibly many others are in a weakened state at the beginning of the game.

Yellow Lums are also required to unlock passages through to the Hall of Doors and the worlds containing each of the Four masks of Polokus. 5 (10 in the PS1 version) are required in the Woods of Light to allow for a Grand Minimus to open a door leading to the Hall of Doors (the Isle of Doors in the Dreamcast, iOS and 3DS versions, or the Front in Rayman Revolution).

In most versions of Rayman 2, Razorbeard eats a Yellow Lum during a cutscene. This causes the total Yellow Lum counter on the heads-up display to decrease from 1000 to 999. This Lum, however, can later be found in a secret room in the Tomb of the Ancients. In Rayman Revolution, it is instead found in the same chest as the Lums Radar, also in the Tomb of the Ancients.

In the PlayStation version, there are only 800 Yellow Lums and Rayman no longer receives the Knowledge of the World from them. In this version, the Yellow Lum which Razorbeard eats is replaced with a Red one. There are also 800 Lums in Rayman 2 Forever. When the word Lums first comes up, it is erroneously spelled as "Lumz"; this strange discrepancy is also present in the PC game's manual, and in the Game Boy Color version. In the PlayStation version, Lums are slightly smaller and they have visible black, beady eyes. In addition, the sound effect for collecting them is changed, and only one sound effect is used for all Lums. Collecting all 800 Yellow Lums in the PlayStation version will unlock a level taken from the 2D prototype of Rayman 2.

In Rayman M and Rayman Rush

In these spin-off titles, one of the modes for the races is known as Lums Race, where the player must maintain 1st position in three laps, but also collect the most Yellow Lums, which are scattered amongst the various paths of the racing track. To this end, a good strategy for this mode is to take different paths in each lap.

In Rayman M, bonus Yellow Lums can be found, these are used to increase the total time in the timer for the track in the On and On racing mode.

These are the 1,000 shards broken from the Primordial Core when the pirates exploded it. When Rayman has collected enough of them, he’ll be able to negotiate his entry into new worlds.
—Manual, Rayman 3 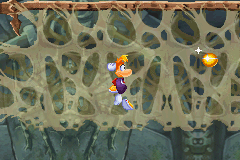 A Yellow Lum, as seen in the Game Boy Advance version of Rayman 3.

Yellow Lums do not make an appearance in the main console versions of Rayman 3, however, they do make appearances in both portable titles. They have the same spherical form as the Tings from Rayman 1, but are coloured Yellow to reflect their role assigned from Rayman 2 as pieces of energy from the Heart of the World. The Game Boy Advance version has a total of 1000 Yellow Lums, while the mobile phone version merely has 175 in total.

Much like in Rayman 2, the 1000th Yellow Lum is secluded from the regular path a player would take to normally beat the game, however, unlike Rayman 2, where the final Yellow Lum was merely hidden in a secret passage, the final Yellow Lum in the Game Boy Advance version of Rayman 3 is hidden in the Lum Challenge. This level serves as a final gauntlet, lacking enemies but having extreme platforming, in order to reach the Lum. 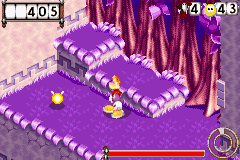 A Yellow Lum, as seen in Rayman: Hoodlums' Revenge.

Yellow Lums feature as a collectible alongside the returning jewels from the console versions of Rayman 3, they award points when collected, but also have a separate counter logging all the Lums collected from the level. They must all be collected as they feature as part of a level's 100% tally, and thus, required for 100% completion of the game.

Yellow lums are pieces of the Primordial Heart that the rabbids have blown up. Once Rayman has collected enough, he can access other worlds.
—Manual, Rayman Raving Rabbids (Game Boy Advance) 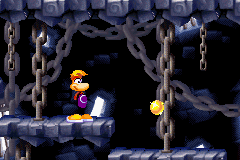 A Yellow Lum, as seen in the Game Boy Advance version of Rayman Raving Rabbids.

Unlike any of the previous titles, Yellow Lums are not simple pick-ups which contribute to an overall tally. Instead, they are used as ammunition for Rayman's long range attacks, similar to the magic fist attacks from Rayman 2. The attack that they contribute to allows Rayman to more easily dispatch of enemies and other offensive machinery. They deal twice the damage of a normal fist attack and have a longer range.

Rayman can collect Yellow Lums much like in past games, where they merely float upon a spot and are added once Rayman comes into contact with them. Yellow Lums can also be found inside of bags, worth five each, and boxes, which contain three bags each. Gold Lums can also be collected, one in each level, to increase the total amount of Yellow Lums that can be carried.

Yellow Lums are also need to grab Purple Lums. Doing so does however not use any Yellow Lums previously collected.

Names in other languages