From RayWiki, the Rayman wiki
(Redirected from Ly the Fairy)
Jump to navigation Jump to search

Ly is a fairy, and like all fairies, she possesses great powers. Unfortunately, the explosion of the Primordial Core by the pirates has weakened her. When she has regained enough energy, she can create Silver Lums, which give amazing new powers to Rayman.
—Manual, Rayman 2

Ly the Fairy is a major character in the Rayman series. She debuted in Rayman 2, and made briefer appearances in the Game Boy Advance versions of Rayman 3 and the Game Boy Advance version of Rayman Raving Rabbids. Along with her fellow fairies, she is an emissary of her creator Polokus, and it is her job to provide information about him and his Four Masks, as well as using her magical powers to create Silver Lums that endow Rayman with new powers.

While she is of a very thin build, Ly shares some typical fairy attributes, such as her long elven ears, her magical powers, and the ability to float in mid-air. Like Betilla the Fairy, she does not have wings. She has short purple hair and a long, bushy tail of the same colour, while having green eyes and lips. Contrary to popular belief, she is not naked, but wears a yellow suit with plum stripes and swirls all over; according to one of the earliest Rayman 2 websites, she 'dresses like the People of Prhys',[1] though it is not known who these people are. The same website initially describes her as an "intriguing feline creature", suggesting that she may have indeed been such originally, though it is unknown as to why she had been redesigned as mostly elven; what remains in her final design is her tail. Early concept artwork for Rayman 2 that depicted her shows that she had most likely been originally an anthropomorphic cat, as she appeared to have cat ears and a non-human nose. In both the Walk of Life and the Walk of Power, she sometimes runs on all fours.

Ly shows great athletic and gymnastic skills, perhaps more so than Rayman's, as she can run faster and jump much higher than he can. In fact, she can cross very large gaps, such as on the river in the Walk of Power, while Rayman would have to use his helicopter. However, it is possible for the player to outrun her in the Walk of Life, though in all versions of the game, apart from Rayman Revolution, she will simply teleport herself to the finishing point if she is too far behind. Despite being very thin, a piece of official artwork depicts her with enough strength to juggle all of Rayman's body parts with ease. She can also shoot energy spheres, like Rayman's, as a method of defence.

Similar to Betilla the Fairy, she is a calm and very meditative character, even in her captivity at the Fairy Glade, and spends most of her time meditating deep in the forest, by floating while in a sitting lotus position. Rayman says that the Woods of Light is one of her favourite places to be. When she is not meditating, she is a fun-loving and friendly character that puts a lot of faith and trust in the heroes of the world, and is willing to help Rayman defeat Admiral Razorbeard and the Robo-Pirate army.

It is unknown if she is at all related to Tily, a much younger fairy who appears in Rayman M/Arena/Rush, and who shares some of her features and has a similar name to her. It has been speculated that Tily was created as a replacement for Ly in these games, as Ly is still seen on some of their promotional artwork.

The original Rayman 2 website describes her as 'wild and independent', and says that she shares the secrets of the People of Prhys, and helps Rayman to protect them from harm.

Ly's story begins in Rayman's mind, when she tells him that the Robo-Pirates have broken the Heart of the World into 1000 Yellow Lums and that it has weakened her, before he gets captured. She is then consulted by Globox, who she gives a Silver Lum to give to Rayman before they are both captured. While Globox is taken to the Buccaneer, Ly is held prisoner in an electrified forcefield in one of the pirate strongholds, deep in the Fairy Glade. The Silver Lum she created gives Rayman the ability to shoot balls of energy, and it is put to good use as he eventually finds her and destroys the machine that controlled the forcefield, freeing her. By then, she only has enough energy to create one Silver Lum, which upgrades Rayman's shooting ability to be used with Purple Lums. Before leaving to gather more energy, she passes her knowledge about Polokus and his four masks to him.

Later on, Ly makes more Silver Lums that make Rayman even more powerful, and by the time he reaches Admiral Razorbeard in the Crow's Nest, she uses one to save him from falling into the vast body of lava, and using telepathy, encourages him to fight until Razorbeard is defeated. When the battle is over, at first she was made to believe that Rayman did not survive the explosion high in the sky, until he turns up alive.

Additionally, Ly offers Rayman to join her in a race through the Walk of Life and the Walk of Power, in which extra Yellow Lums are found, and offer him to have his health and power maximised. Despite it being a race, Ly does not have to be beaten.

In Rayman Revolution, it is revealed that Ly resides in a house built in a giant tree somewhere in the East Plain, and it is there that she offers Rayman to play some minigames that top up his health and power, provided that he frees and brings to her enough Familiar Spirits for each game. She also meditates from a stone in the area of Globox's House, and a stele in Rainbow Creek She is also a playable character in the unlockable minigame Missile Dogfight.

Ly plays a similar role in Rayman 2 Forever, the Game Boy Color version of Rayman 2, but like most characters her part is reduced due to the limitations of the Game Boy Color. She is not captured in the Fairy Glade and is simply encountered there. She does not give Rayman the power to swing from Purple Lums on screen, although the rings (the equivalent to the Purple Lums in this version) do not appear until after her meeting with Rayman in the Fairy Glade, suggesting she may have given him this power after all and it was simply not shown. She tells Rayman to gather the Four Masks of Polokus as always, but offers no explanation as to what they are. She appears several times throughout the game to give Rayman the temporary Super helicopter power, and instructs him to destroy Razorbeard before the final battle. She congratulates Rayman upon his victory. 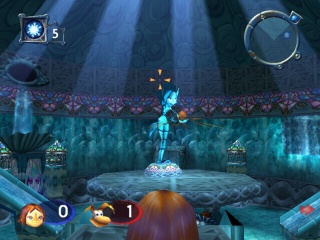 A statue of Ly in the centre of Ly's Palace.

Ly does not appear as a playable character in Rayman M, but in Ly's Palace, a statue of her can be found in the centre of the room. 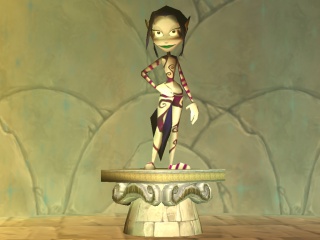 A statue of Ly in the Longest Shortcut in Rayman 3.

Concept art of Rayman 3 shows what appears to be a scrapped character design for Ly's appearance in the game; it can still be found in the Rayman 3 Print Studio. A statue of Ly, in her original design, still appears as a cameo in the third phase of the Longest Shortcut, hidden behind a painting. 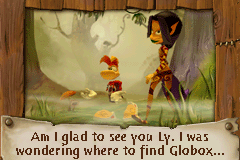 Ly's tail is inconsistently shown in its original position here, in the Game Boy Advance version of Rayman 3.

In the Game Boy Advance version of Rayman 3, Ly plays largely the same role as Betilla the Fairy in the original Rayman game. Oddly enough, Ly's sprite in this game shows that her tail is missing, and is now replaced a large ponytail at the back of her head, though in a cut-scene she still has her original tail and short hair. 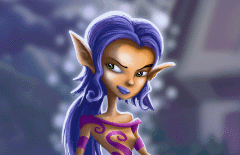 Ly as she appears in the Game Boy Advance version of Rayman Raving Rabbids.

Ly makes some brief appearances in the Game Boy Advance version of Rayman Raving Rabbids, where she gives Rayman a costume medallion every time he defeats a boss. While the game uses the same sprites as the Game Boy Advance version of Rayman 3, she has a new appearance in the cut-scenes, where the front of her hair is curlier than before, she has pale blue lipstick, and her suit reveals her shoulders.