Wanderwood Forest is the first level in the Game Boy Advance version of Rayman 3. Reminiscent of the Woods of Light and the Fairy Glade in Rayman 2, it is an introductory level in which Rayman starts looking for Globox, and meets Murfy, who again gives help and advice to the player about the game's controls and some of the dangers. It is found in the Forgotten Forests on the World Map. 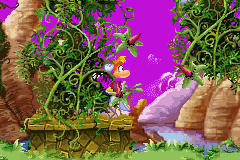 Rayman hanging on to some growing plants.

There is one cage and 25 Yellow Lums in this phase, all of which can be obtained for the first time the level is played. Rayman exclusively seeks out Globox here, and meets Murfy along the way. There is no mortal danger here, though there are lots of pits underneath the masses of plant life Rayman climbs on. 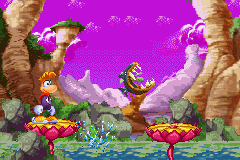 Now, there are stagnated, piranha-infested waters reminiscent of those in the Fairy Glade, (which cause instant death upon contact) to cross with floating flowers. Rayman also encounters Green Lums, which like in Rayman 2 act as a checkpoint, and Red Lums, which recover his health. There are two cages - both of which can be reached - and 30 Yellow Lums in this phase, but Rayman will have to backtrack this area to collect them all after he is given the power to grab Purple Lums later on.

Here Rayman meets Ly the Fairy, who gives him the power to use both of his fists, which will prove to be useful for knocking down large objects such as oversized kegs and crossing the deadly waters with.