From RayWiki, the Rayman wiki
(Redirected from Raving Rabbids Travel In Time)
Jump to navigation Jump to search

Raving Rabbids: Travel in Time is a game in the Raving Rabbids series (formerly Rayman Raving Rabbids as of 2010). It was first trademarked by Ubisoft in March 2010, and was later confirmed for release at E3 on June 15, 2010. The game was released in North America on the 21st November 2010 for Wii, and was released in Europe a few days after. Not only is it the first party game in the series to have completely omitted Rayman (Rabbids Go Home was the first game of the series in general to do such but was a platformer) from both the actual game and the title, it is also the first to be released without a counterpart for the Nintendo DS. It is also Wii Motion Plus compatible. The game is sold in two types of editions: the normal edition and the collector's edition. The collector's edition is a pack that includes the game itself, an exclusive 9 cm Pirate Rabbid made of PVC and an exclusive in-game costume of Emperor Caesar which is unlocked with a code from a panflet inside the collector's edition game box. A Nintendo 3DS version has been released in April 2011.

Set in the year 2012 as the default year, the Rabbids discover a Time Washing Machine. In the intro to the game, a Rabbid is traveling through time, from a prehistoric setting, to ancient Egypt, and other time periods. The Time Washing Machine gets damaged in traveling. The Rabbid travels in time to a history museum. He and other Rabbids access time periods through pictures of the event. As they alter time, they create different scenarios, such as giant Rabbids and the Earth under water and in space. At the end of the game, the Golden Time Washing Machine is accessed. The Rabbid travels to future, into the year of 4096 and ends up in a large facility. He explores the facility and finds some pants on the wire of one of the giant robots and pulls the pants off, making the robot shoot a laser and open up a door. Professor Barranco (from Rayman Raving Rabbids 2) is drilling Rabbids in using time machines to conquer history. The main Rabbid pulls the plug on one of the machines, sending him and the machines into time, making a very fast version of the game intro. This sends the Rabbid back to the history museum.

The setting is a history museum. From there, the Rabbids can play quiz, singing, and dancing games. They can also customize their Rabbids with historical costumes. The Rabbids can also go into museum's main areas: the Bouncearium, Shootarium, Flyarium, Runarium and Hookarium; to ruin history with their Time Washing Machine. 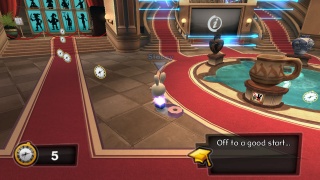 A Rabbid in the Main Hall.

Up to four Rabbids begin in the Main Hall of the museum, and can only access certain rooms and the associated minigames, many of which are barred with electric fences. As each minigame is cleared, these bars disappear allowing more access to more areas. There are five sections in the game: the Bouncearium, using side-scrolling platform minigames, the Shootarium, using first-person shooting minigames, the Flyarium, using flying race and scavenger hunt games, the Runarium, using two teams racing together in races and scavenger hunt games, and the Hookarium, using the Wii Motion Plus accessory for fishing games. Each of the minigames explores history, such as the missing nose on the Sphinx, why Mona Lisa smiles, the discovery of fire, and other historical events. Like Rayman Raving Rabbids, the player moves around to play minigames and do other activities. The player can play online and do local tournaments in the game. When the game is in multiplayer mode, all of the players are tethered together by a roll of toilet paper.

This game can connect to the internet. Unlike the other Rabbids games, which let you send your score to a website, this game has online-based leaderboards within the game. The game lets you join a group of other players to play against other groups in tournements of the highest minigame score. They can also meet up at a player's museum and play games or tournaments with each other. At the end of each minigame, the player can look at online leaderboards and try to beat others to get to be one of the Top 5 online. Players can also send messages to each other. 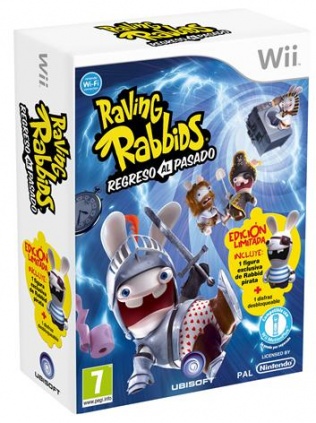 The game was released to mixed or favourable reviews. Nintendo Power gave the game a 6.5, while Videogamer gave it a score of 8/10. Official Nintendo Magazine criticized the game negatively, giving it a 40/100. Recently, IGN reviewed the game, praising the graphics and the museum hub included, and gave the game a 7/10.