Bunnies Are Heartless With Pigs 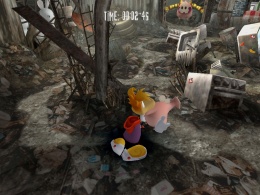 Rayman tries to take the piglet across the junkyard..

Bunnies Are Heartless With Pigs is a minigame in the console version of Rayman Raving Rabbids.

Rayman has to grab hold of a piglet, and walk a short distance through a junkyard where the piglet's mother stands at the other side as quickly as possible. However, Rabbids armed with flamethrowers are hiding underground, and there are many obstacles they will have to move around, so the player has to listen to the piglet squeal if it thinks that they are close to a Rabbid. Should they come too close, the Rabbid will ambush them and burn them with the flamethrower, losing the game. If Rayman manages to reunite the piglet with the mother, the player wins.

Gameplay is exactly the same, but the Rabbids start throwing firecrackers, confusing the piglet. The firecrackers last approximately three seconds and wandering into their path can often lead to a mission failure.