Bunnies Have No Memory

From RayWiki, the Rayman wiki
(Redirected from Bunnies Have No Memory (Part 2))
Jump to navigation Jump to search 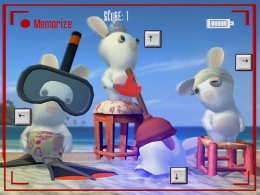 These Rabbids play a memory game

Bunnies Have No Memory is a minigame in the console version of Rayman Raving Rabbids.

This game is a memory game, in which four Rabbids are filming themselves on the beach. Each one makes a distinct sound, and the aim of the game is to touch them in the order they make their noises, to score as many points as possible. The same sequence will repeat, only adding a new sound each time, making it longer and more difficult to repeat. As the game prolongs, the Rabbids' sequences will get faster, and the game ends when the wrong Rabbid is picked.

Sergueï appears in the game as well, making the sequence a lot harder to remember.

In Score Mode, the game can be found in the Precision section of Sports. The player needs to score 400 points in both parts in order to achieve a perfect (1000) score.