From RayWiki, the Rayman wiki
(Redirected from Bunnies Like To Stuff Themselves (Part 2))
Jump to navigation Jump to search 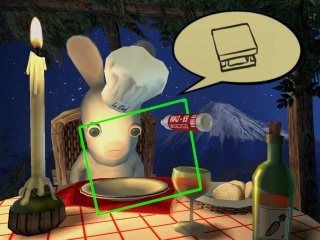 A Rabbid waits for a meal

Bunnies Like to Stuff Themselves is a minigame in the console version of Rayman Raving Rabbids. It is one of the very first minigames to be available on Day 1 in Story Mode.

In this game, a Rabbid in a chef hat is waiting to be served up some meals at an outside cafe, some of which range from real food such as sausages and pizza, to objects that can't really be eaten normally, such a tennis balls. On screen is a marker pen, and the player has to draw around the exact shape that appears - when done correctly this turns into the meal the Rabbid wants. The better it is drawn, the more points are scored. The game ends when the candle beside the Rabbid melts to the bottom and the light goes out.