From RayWiki, the Rayman wiki
(Redirected from Bunnies Are Slow To React (Part 3))
Jump to navigation Jump to search 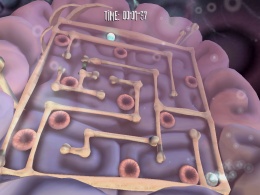 In this game, three Rabbids stand close to one another, one of which hits another on the head with a club. The victim Rabbid's brain is then zoomed in to reveal a maze made of bones that has to be tilted to transfer the brain signal (which looks like a ball) from top to bottom, without it falling into the holes, as quickly as possible. If it does fall in, the player will lose, but if the player wins, then this Rabbid will make his reaction by attacking his opponent with three times larger strength and brutality.