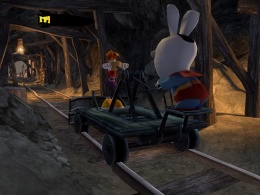 Rayman prepares to toss a Superbunny high in the sky

Bunnies Can't Fly is a minigame in the console version of Rayman Raving Rabbids.

In this game, Rayman and Clark are on a railcar. The player has to pump the railcar and move it backwards as quickly as possible, until it hits the edge of the rail, tossing Clark high into the air. The aim of the game is to toss him as far out as possible.

The second part is the same as the first, only Clark has a rocket on his back that gives him an extra boost so he flies farther.