In the same vein as its console counterpart, the Rabbids have invaded the TV, and Rayman has to kick them out before it drives him insane. Rayman travels through the TV network, removing Rabbids as he goes.

In Adventure mode, Rayman has to take turns against a Rabbid to hop around on a board game style screen and reduce the number of Rabbids in the TV set every time he reaches a square with a TV icon before this Rabbid does - it moves it to another place on the board if it does. When Rayman uses his spaces up (he earns up to four depending on how well the player plays a minigame), the Rabbid takes his turn and moves two squares, before Rayman has to play a minigame. He removes 10 Rabbids everytime he touches the TV. There are also green squares with question marks on which plays a random positive or negative effect on Rayman's progress. The following can happen when he does:

The Rabbid cannot use these green squares. 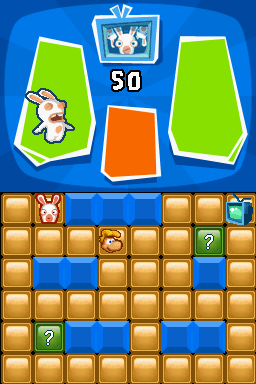 At first, only one channel of minigames is available, but unlike its predecessor, the game picks a minigame at random. At least one square is obtained whether or not the minigame is completed successfully, though a maximum of four can be obtained. Six channels in total become available as the game progresses, and each of them has seven minigames. This carries on until all of the Rabbids are booted out of the TV for each round. There are five rounds in total.

Once there are no Rabbids left in the TV, Rayman has to play a game of "Catch the Rabbid". The game switches to a 2D side scrolling minigame in which Rayman is running automatically, and can jump over things such as trash cans using the DS stylus. When he gets close to the Rabbid, it uses one of four chillies to boost, and it can only be caught then after it has eaten all of the chillies.

In this mode the player can draw on or add items won in the games to a particular Rabbid, akin to Rayman Raving Rabbids 2 on the DS.

In Score mode, the player can choose a channel and then choose whichever minigame he/she likes. 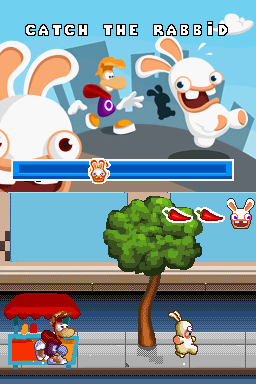 Catch the Rabbid is a bonus minigame.

Below is a list of all minigames in the game. The minigame Rabbids Gym is found in the Groove On, No Brainer, MachoTV and Cult Movies channels.