High Voltage is the fourth level of the Grumbling Grottos, a world from Rayman Origins. The level takes place in a similar environment to that of Best Original Score. This is the second level from this world, and the twenty-second overall to not be included in the Back to Origins painting from Rayman Legends.

The beginning of the area is pretty quiet. As the heroes progress, they will encounter a spark; these will shock the heroes if they come into contact with one while it is enlarged. If the heroes carefully time their movement, then quickly perform wall jumps against an electrical wire, they can find the first Skull Coin above. In order for the nearby second Skull Coin to be collected, the heroes will need to crush attack onto a large drum, then glide safely to reach the coin, carefully avoiding the three sparks. The heroes will eventually encounter two paths; if they go to the right, they can find the first secret area, but if they use the nenuphars to climb, they will be able to find the exit. 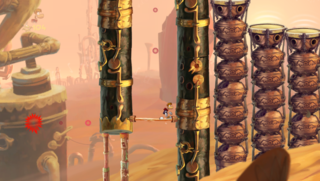 The first relic can be seen to the far right, in front of a long drum.

The first relic can be found in this area, located in front of a long drum. 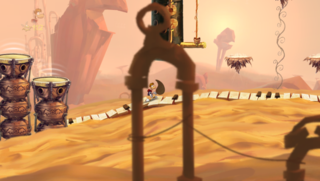 The second relic can be seen in the foreground, directly in front of Rayman.

The second relic can be found in this area, located in the foreground. 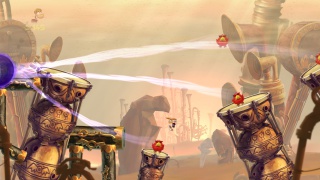 The second secret area of the level.

The heroes will need to use the tilted drums to their advantage while defeating some sleeping Red Birds. Once all have been defeated, the Electoon cage can be broken.

The heroes must avoid being shocked by electrical wires and sparks, along with some spiky birds. The sixth Skull Coin can be found by taking the higher path of the wires, in the middle of a few sparks. The heroes can find the exit once they manage to pass all of the wires. 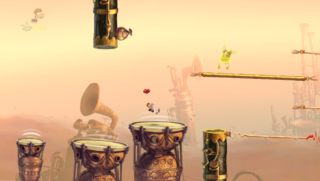 The third relic can be seen in front of the drum, directly below Rayman.

The third relic can be found in this area, located in front of a drum. 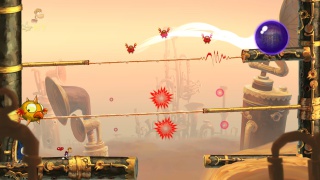 The fourth and final area of the level.

The heroes will need to climb and reach the top of the area, while carefully timing their movement in order to avoid the large sparks. Once they have reached the top, they will need to defeat three Red Birds; the Electoon cage can then be broken, ending the level. The heroes will then pose on the photoboard as the Magician waits for the amount of Lums that were collected throughout the level.