Mystical Munkeys is the second level of the Mystical Pique, the fifth world in Rayman Origins. During the level, the heroes will alternate between the strange cave like area and the snowy mountains. The PlayStation Vita version of Rayman Origins features a Ghost Mode of this level. This is the first level from this world and thirty-third overall that's included in the Back to Origins mode in Rayman Legends.

The heroes will need to use the power to run on walls in order to progress, as they avoid the pits and spikes. The first Skull Coin can be collected by gliding in between two Darktoons attached to a wall. The second Skull Coin can be found by running up on the wall which is located to the left of the exit. 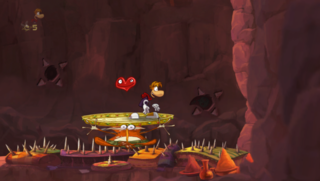 The first relic can be found to the right of Rayman.

The first relic can be found in this area; it is located to the right of the second fakir that the heroes will encounter, embedded in a hole in the wall. 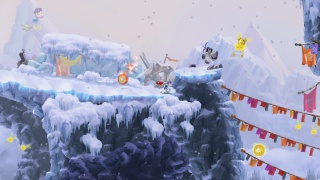 The stone man returns as an enemy.

The heroes arrive at a snowy environment filled with icy platforms and chasms. Once they ascend, they will encounter an enemy that is familiar to Rayman; the stone man, who has not been seen since the original Rayman game. He acts similar to how he did in the original game; he throws lava rocks at the players. Once the stone man has been defeated, the heroes can proceed. The third Skull Coin is located to the left in the middle of two ropes. The first secret area can be found right underneath the third rope. The heroes can then proceed to the exit. 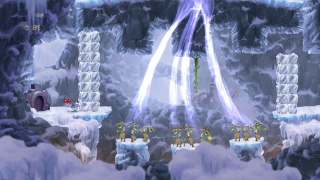 The first secret area of the level.

The heroes can defeat the Lividstones in two ways. One way is to defeat them manually, while the other is by breaking the ice blocks, making the large platform collapse and crush the Lividstones. Once they have all been defeated, the Electoon cage can be broken.

The heroes enter the cave again, where the meditating Fakirs will be needed to help them pass the dangerous spikes. The fourth Skull Coin can be found hiding behind some kind of clothing. The heroes face many Darktoons as they progress. The fifth Skull Coin is located between two biting Darktoons. 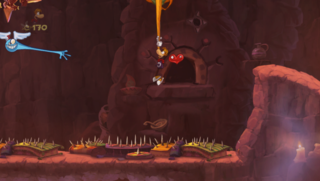 The second relic can be found to the left of Rayman's feet.

The second relic can be found in this area near a swingman and a fakir with a long beard. 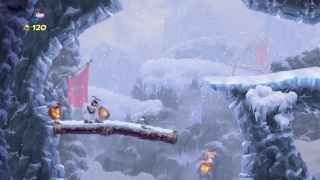 The stone men throw lava rocks that can now bounce off the walls. 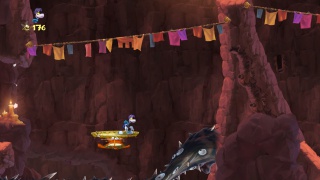 Once again into the cave, more Darktoons appear, as well as Darkroots. Using the wall run ability will come in handy to advance. After a while, the second secret area can be found by dropping down next to a small Darkroot. Once completed, the heroes can go to the nearby exit. 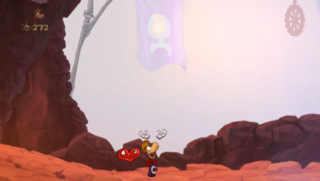 The third relic can be found directly above Rayman.

The third relic can be found just as the heroes enter this area; it is located on a flag in the background. 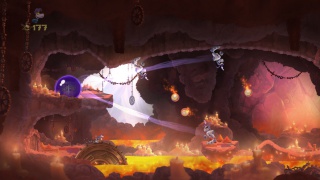 The second secret area, with loop-d-loops.

The heroes will need to run on the loop-d-loop in order to reach the stone men in the area. A couple of them are even standing on the walls. Once all of them have been defeated, the cage can be broken. 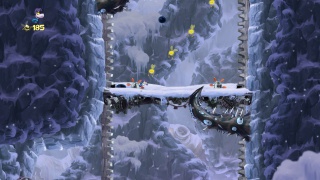 In the snowy environment, two switches attached to an elevator need to be used in order to lift it. The switches will need to be used alternatively, as Darkroots will appear on both sides. Once the elevator arives at the top, the exit can be found to the right.

The heroes remain in the snowy area, where the process will be similar the previous area, except it will be more difficult. The sixth Skull Coin can be collected by hitting the switch, making the elevator raise to a higher altitude than the coin's position, then dropping down to the right to collect it. Once the elevator reaches the top, the exit can be found to the right. 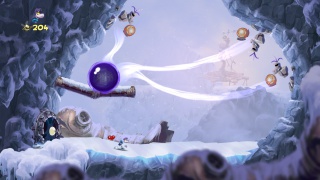 The eighth and final area of the level.

All the heroes will need to do is defeat the three stone men. Once they have been defeated, the Electoon cage can be broken, ending the level. The heroes will then pose on the photoboard as the Magician waits for the total amount of Lums that have been collected throughout the level.

In the Back to Origins version, there are not many differences between the original version; except of the notable elements from Rayman Legends replacing some of the elements from the game.