Best Original Score is the second level of the Desert of Dijiridoos, the second world in Rayman Origins. The heroes will use friendly green birds throughout the level to advance, and use small platforms to deactivate blocking electrical shocks. The PlayStation Vita version of Rayman Origins features a Ghost Mode of this level. This level is the first one from this world and ninth overall that is included in the Back to Origins painting in Rayman Legends.

As the heroes enter the level, the Magician can be seen to their left; he gives them some information about saving Electoon cages, and popping bubblized enemies to earn more Lums. Now the heroes can move on, jumping on friendly green birds that remain stationary on music sheets. The first Skull Coin can be found by passing a water current, under a bad Red Bird. Afterwards, they will encounter another Red Bird bouncing a platform which makes the friendly green birds appear or disappear. The heroes can defeat the bad bird and use the friendly ones to advance. The rounded bird can be crush attacked in order to reach the second Skull Coin of the level. Eventually, after defeating some Darktoons, the heroes will hear an Electoon crying for help. To reach the secret area, the heroes must perform walljumps and climb to the top, nearby are some some Helmet Birds. Once the Electoons are saved, the heroes can proceed to the exit. 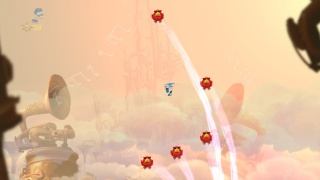 The cage can be found at the bottom of the area. The heroes will need to glide in order to safely destroy the Red Birds as they descend. Once they are destroyed, the cage can then be broken. 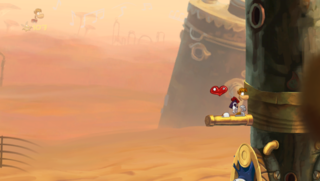 The first relic can be found just to the right of Rayman.

The first relic can be found above the exit in this area.

The heroes will need to advance, while avoiding some electrical currents. Afterwards, the heroes have to use a small green bird in order to pass more electrical currents; the bird will release a Skull Coin in a bubble, the third coin of the level. As the heroes approach the exit, there is a Bumper Notebird that nears it; the heroes can obtain the fourth Skull Coin if they crush attack the bird, then the exit can be found beneath the coin.

The heroes will need to use more friendly birds and advance to where they will encounter several electrical currents. All of the currents can be temporarily deactivated by jumping on a small platform. There is a switch that can make three green birds appear if activated; performing a crush attack on the last one will help the heroes reach the fifth Skull Coin of the level, located next to a spiky bird. The exit can be found ahead, next to a sleeping Red Bird.

As the heroes destroy a few Red Birds along the way, more electrical currents will block their path. Using a small platform to deactivate them and taking the higher path will result in them reaching the sixth Skull Coin. The second secret area is not too far away; the heroes need to perform walljumps to ascend in order to reach it. Once the Electoons are saved, the heroes must activate two groups of friendly birds, the others will appear by themselves, as if they were linked to a gendoor. The heroes can reach the exit by using the Swingman. 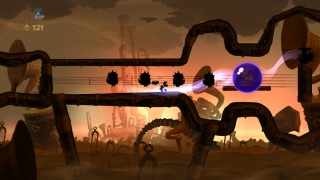 In this very dark area, the heroes must destroy some Helmet Birds and a Blowing Bird. Once all are defeated, the cage can be broken. 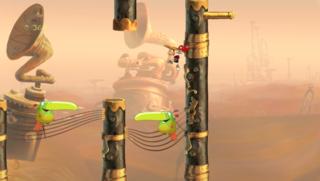 The second relic can be found on the bottom left of this image, just below the Notebird.

The second relic can be found in this area just after the heroes pass some piano keys. 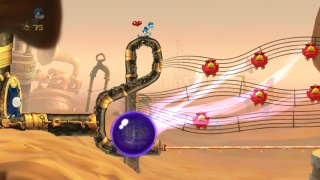 The heroes must destroy the sleeping Red Birds in order for it to be possible to break the Electoon cage. Breaking the cage ends the level, then the heroes will pose on a photoboard as the Magician waits to accumulate the total amount of Lums that were collected throughout the level.