From RayWiki, the Rayman wiki
(Redirected from Grumbling Grottos)
Jump to navigation Jump to search 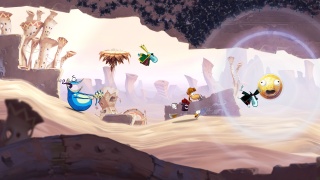 The Desert of Dijiridoos, later revisited as the Grumbling Grottos, is the second world in Rayman Origins. It was later used in Rayman Legends in the Back to Origins mode. This world is composed mainly on music and musical instruments, resembling Band Land, a world from the original Rayman game.

The Desert of Dijiridoos consists of a big desert landscape. Throughout the desert are a bunch of different instruments, such as pianos, bongos and gongs. Few instruments assist the players throughout the world.

This world is the home of the Music Nymph named Holly Luya. But like Betilla was in Jibberish Jungle, she has been captured by a Darktoon. When she is saved, she gives the heroes their second permanent power, the ability to glide. As the team continues on throughout the imagination world, they will encounter different kinds of birds, both friendly and non-friendly. Other enemies such as electrical shocks and familiar looking spiky birds appear. Some areas are very windy - the team must use their newly acquired glide power to fly with the wind. When the heroes eventually get on the mosquitoes, they will enter into the third world, Gourmand Land.

Later on, the heroes must find and save the Four Kings in order to advance to the Moody Clouds. One of the worlds they enter is Grumbling Grottos, filled with mysterious caves near the desert. But unlike Desert of Dijiridoos, this world is more protected and hazardous. New hazards includes swarm of flies, where Rayman and his friends must use gongs to create sound waves which shield them from the swarms of black flying creatures which resemble locusts. The boss of this world is the Mocking Bird, a more dangerous version of the Boss Bird. 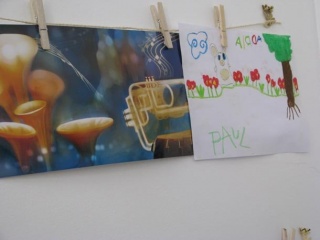 Band Land served as the early inspiration for the Desert of Dijiridoos.

Desert of Dijiridoos returns as a world in the Back to Origins mode in Rayman Legends. The levels from Desert of Dijiridoos and Grumbling Grottos fuse together into one world with some levels, such as the Electoon stages, not being present. The levels themselves mostly remain the same, with some graphical updates. The Magician's hat has however been removed from the levels and some levels have been made easier. 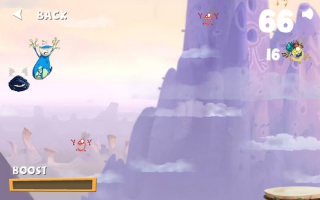 Globox in the Desert of Dijiridoos in the game Slap, Flap and Go.

The Desert of Dijiridoos also appears in the online flash game Slap, Flap and Go.