From RayWiki, the Rayman wiki
(Redirected from Medieval Mayhem)
Jump to navigation Jump to search 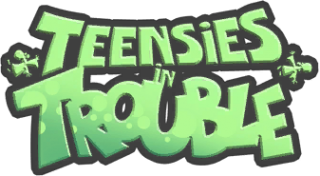 The logo for Teensies in Trouble.

The Enchanted Forest theme, not to be confused with the level Enchanted Forest in Rayman Legends, is the most commonly found theme in Teensies in Trouble. The theme greatly resembles Jibberish Jungle from Rayman Origins in that it takes place in a forest environment. Unlike Rayman Origins, this forest has many parts of it which appear to be alive, and can thus move. This can be anything from what appears to be a big hill, to a bunch of branches. In several stages Murfy can be used to interact with these in various ways. Blue butterflies reveal secret passages in several stages.

The Dark Dungeon theme, also known as Castle Interior, takes place inside of old medieval themed castles and dungeons. Old spiderwebs and coffins can usually be seen on the walls. In Rayman Legends, Murfy is often used to interact with the environment, such as cutting ropes, while in Rayman Adventures there are usually switches which can be activated. More death traps appear in Rayman Adventures, such as moving walls closing in on the player and water streams pushing the player away. Several stages in Rayman Adventures allow the player to, by using switches, rise the water level to reveal new secrets and progress forward.

This theme was later reused for the Murfy's Dungeon stages.

The Castle Ramparts theme, also known as Castle Exterior, is introduced in How to Shoot your Dragon and used for the rest of the levels. It has a medieval setting with mythical creatures like dragons, as well as castles.

In Rayman Adventures this theme reappears, though without any dragons.

The Phantom Manor theme, also known as Haunted Castle, is a theme exclusive to Rayman Adventures. It is heavily inspired by the unused Dracula's castle theme from Rayman Legends. It takes place inside of old haunted castles, with many painting hanging on the walls, some of which use assets from Rayman Legends. Many switches appear, some of which can reveal secrets behind the paintings. The most common enemies here are Lividstones and Ghosts.

The level Quick Sand uses its own unique theme which was later reused for the Infinite Tower. It takes place in a desert with many collapsing towers.

The game begins with the heroes sleeping high up on a tree with Murfy waking them up to tell them about the new nightmares which are appearing. The heroes then begin their journey in the Enchanted Forest environment, with them quickly entering an old castle in the Dark Dungeon environment. Together with Murfy's help, who can cut ropes and move obstacles, they make their way through. The next level, Creepy Castle, has them visiting yet another castle, this time without the help of Murfy.

After that they make it out of the castle and into the Enchanted Forest. This is where they first start seeing the moving parts of the forest, which makes traversing it much more dangerous as certain grassy blocks will continuously move up and down. In the next level, Ropes Course, they once again team up with Murfy who this time serves useful at scaring away certain enemies.

After that they meet up with the first Dark Teensy, who's kidnapped a Teensie. The heroes then set out across a large desert with collapsing towers, to eventually catch up with him and save the Teensie. After this, in How to Shoot your Dragon, they go through yet another dungeon to then end up outside of a castle with a group of Dragons. With Murfy's help, who shoots the them using a slingshot, they make it across a field of collapsing platforms, to then finish the level. The next level, Breathing Fire!, has them confronting this world's boss, the Medieval Dragon, outside of a castle filled with Lividstones.

The final level, Castle Rock, takes place on the remains of the castle walls and has the heroes running to the beat of the song, which is a parody of the song "Black Betty" by Ram Jam.